Airlines have been hedge-trimming, but where are they now?

It’s been a round ride for airline operators over the last 3 years. Just when you think things are re-stabilising after COVID then the energy ‘crisis’ hits the fan and fuel costs increase 3 fold!  But the operators have been hedging, right? And if you’re hedging then you’re eliminating risk, right? If only life were that simple.

Following the outbreak of covid-19 pandemic, airlines slashed flight schedules amid lockdowns and border closures. As a result, airlines found themselves hedged against millions of barrels of unneeded fuel purchases, leading to fuel hedging losses of billions. Hedge contracts are cash-settled, which resulted in the airlines not only committed to pay the price of jet fuel used and unused, they were paying pre-pandemic prices of around $600/MT when the market price fell to $200.  This chart says it all:

We can pick on EasyJet as one case recording losses of over £300m in their FY2020. Unless you are buying options, hedging requires fulfilment of a contract for buying a set quantity at a fixed price. This is where the airlines lost out. Hedging can only transfer anticipated risk. But risk in its very nature is uncertain!

Subsequently, this led to an overhaul of hedging strategies, whereby some airlines decided to lower dependency on hedging while few even discontinued the practice altogether. But as oil prices started to rise, many have boosted their hedge ratios back to pre-pandemic levels, helping them smoothly expand capacity and maintain gross margins despite rising input costs.

A look at EasyJet – know your numbers!

I say this so many times when training new analysts…. But you really need to know your numbers! It’s not just picking up the big and the small, but knowing how the financial statements link together and what ‘story’ they tell you.  Look at EasyJet’s P&L below. In FY 2020, the cost margins, particularly fuel, just look pretty normal.

So why are is fuel (as a % of revenue) not bouncing all over the place? Using reported EBITDA as a measure of profitability is not the complete picture. The problem with accountants is that they love to smooth out the P&L, and that lovely smoothed number  excludes any losses on over-hedged positions. You will find these losses in the statement of Comprehensive Income (as “Other Comprehensive Income” – OCI):

The £628 loss is the MtM loss on all the derivative contracts (on fuel not yet consumed) but, of that, EasyJet recognised that £284 related to contracts that could never be fulfilled due to reduced levels of activity. So they closed the hedge contracts and absorbed the losses into the P&L (but ‘below the line’ of EBITDA) .  £39 related to fuel they had actually consumed in 2020.    So the “over £300m losses” reported are these two numbers added together.

Only when building this is do you get the true story of what the company has been up to an whether it’s hedging is working or not. These ‘non-core’ or ‘one-off’ items shouldn’t be ignored – they can break a business.

So was EasyJet alone?

Here’s an chart from EuroFinance I found when reading up on the subject. 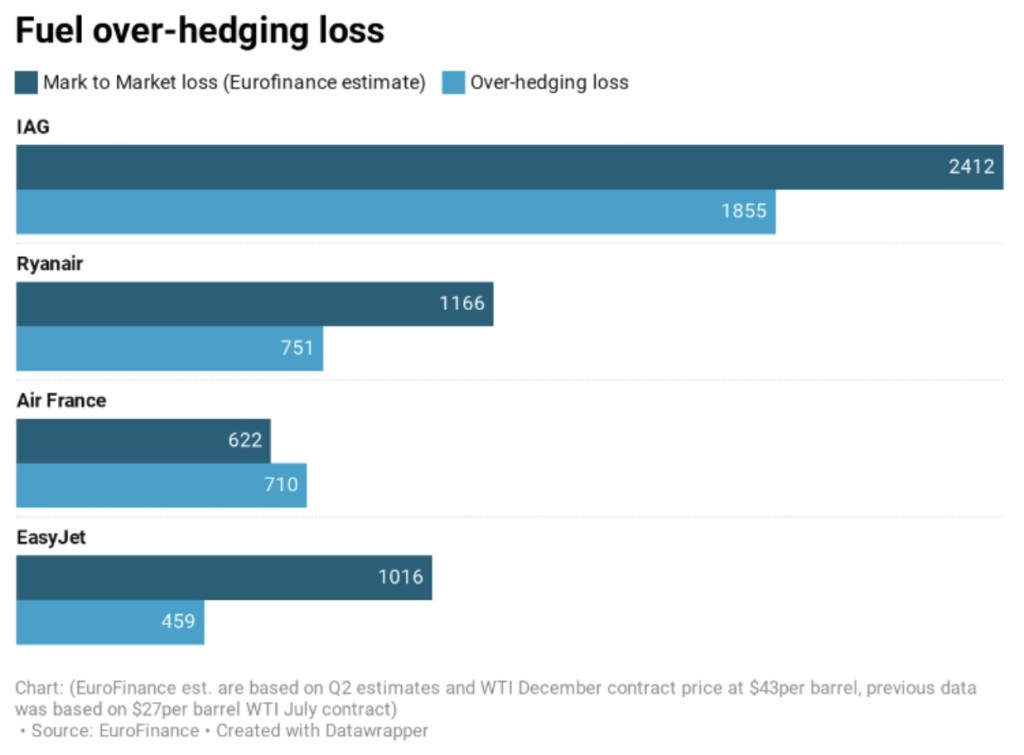 So, no, EasyJet was not alone – pretty much every airline hedges to some extent and they all got stung.  Lufthansa posted €764 million ($886 million) fuel over-hedging losses in Q3 2020 and received €9 billion in state aid from the German government that same year. It must be nice to be loved that much!

This forced the airlines to rethink their strategies and tactics for hedging. As a strategy you can’t fault hedging. Tactically, you can! – eg how much, when, which contracts, what products (forwards, swaps or options?).  It’s hard to ‘win’ when the market is in unchartered territory.

In my mind, the worst thing to do is faulter and hesitate on the hedging decision. One airline did that: WizzAir – the budget airline.

After making significant hedging losses in 2020 and as the price of oil crashed, they stopped hedging. Just after some sign of post-COVID normality comes around, the war in Ukraine pushes us into an energy crunch and the price of oil surges. The price of jet fuel is strongly correlated and is often hedged with oil contracts. Look at the price chart above – over $700 / MT: seven times the pandemic low price. Ouch.

In June 2022, WizzAir restarted its hedging. As an investor, I’m not impressed. I’m out. I need clarity, consistency, and level-headedness at the helm: not fear!

And where are they now?

With more certain visibility around traffic volumes, the airlines are back into letting their hedges flourish.  Of course, once bitten twice shy – and, taking IAG as an example, it is hedging up to 60% of its anticipated 12month jet fuel consumption, and up to 30% of the following 12 months. This is around ‘normal’ pre-COVID levels.   But the main thing I’ve noticed is that the greater use of call options too – previously not thought necessary due to the predictability of volumes.    Corporates have always been shy of using options due to the upfront cost.  Suddenly that insurance premium is very worthwhile!

Airlines are now back on an even keel – apart from staff and capacity shortages! – but volumes are now much more predictable than before. At least until the next crisis. A recent course we have been running at CCT shows analysts how to read the ‘risk data’ in a set of financial statements. What kind of exposures are there? What is the company hedging? What products does it use? How successful is it? We go on to look at modelling financials through various scenarios and look at the products companies can use to hedge their exposure – whether forwards, swaps, or options. We do it with cases and models: all very hands-on! Drop us a line if you’d like to discuss how we could tailor it to your business needs.

About the Author: Greg

Sign-up to get the latest news and update information. Don't worry, we won't send spam!