The adventure in biotech continues….

When we left off before my judgement seemed to have paid off at great speed! But this just left me with a dilemma, should I cut and run or stay in?

To try and get some perspective I had a look at Arix’ portfolio in detail and took a couple of mainstream Biotech investments as a benchmark. I picked good, solid 4-star performers1, rather than a 5-star “star” performer like Polar Capitals’ biotech fund, to give some perspective.

Superficially Arix’ performance, a 2% total return, doesn’t look that great, but the problem Arix has is that its share trade at a significant discount to its net assets: On a Net Asset Value (NAV) basis – i.e. the value of its assets per share after taking off debt- I estimate that Arix’ total return over the same period is 33%. (Even after its recent completed exit, the shares still trade at a 20-30% discount to net asset value.)

During the same period, the NASDAQ Biotech index has returned 42.3%.

We might stop at this point and say Arix has lost. Before we do that though we need to look more deeply at what the different funds are.  If we look at Amgen , which is in the top 10 of both AXA and BGT, we see a company with a mature drug portfolio with operating profits of over $9.0Bn in 2020 and a market cap2 of $138Bn. In contrast, if we look at the most valuable company in Arix’ portfolio, Harpoon therapeutics, it has only $4m of revenues ( that’s right $4m from collaboration rights and license revenue) and operating losses of $40m.  It’s market cap is $640m.  Harpoon has products in clinical trials, but it is still in the pre-commercial stage.  This is the fundamental problem of comparing what I’m calling a  “venture” fund, Arix, with the conventional biotech funds.

The companies in Arix’ portfolio have all been developing and their portfolio of products is maturing with more and more treatments progressing to later and later stage clinical trials: 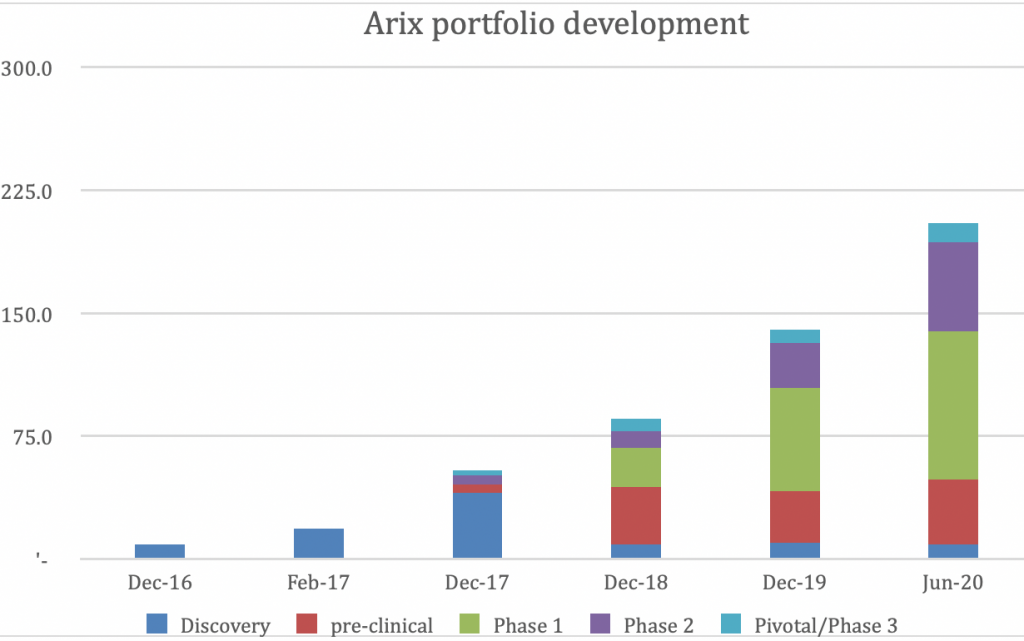 Arix has had failures, but at a very early stage. Generally, the portfolio assets have kept revaluing up. What this means is that as the companies come to raise new money from investors to fund the next stage of R&D, investors pay a higher price: the further along the drugs get in the development process (without failing!), the more credible and potentially valuable they are. The returns to date (assuming they can liquidate at their current valuations) are typically in the high 20%s with some standouts like Harpoon which has returned over 125% over the hold period and VelosBio which generated over 300% equivalent to 12x cash invested.

So the large funds have benefited from big reratings of most of their large stocks during the COVID crisis, (i.e people are just paying a lot more for biotech stocks).   Arix has few listed investments and it will be 2-3 years before the bulk of its portfolio gets through the pivotal stage 3 clinical trials to then start generating sales revenue. Secondary market and follow-on fund raisings show that almost all Arix’ holdings are being valued more highly as they come back for funding.  So in a nutshell, Arix is a much riskier portfolio, with products which aren’t yet commercially proven which could be worth multiples of their current valuations. Or not.

When initially I bought Arix, part of the appeal was that it’s performance wouldn’t be correlated with anything else in my portfolio.  It would be just to do with the success of Management in finding winning new treatments and not the market or the economy or inflation.  That seems to be paying off, and management’s recent presentations suggest that they think they may double the NAV per share over the next 3 years!  So, if I’ve bought in cheaply and it’s working: surely I should stay along to see the portfolio through to fruition?  Maybe, when the portfolio has had time, it will outperform the large funds?

Having made the case for staying in, there are some caveats and the big question of should I own a lot of Arix?  The first issue is the concentration of Arix’ portfolio.  10 stocks represents 93% of their portfolio by value.  That’s a very concentrated portfolio.  Within that the companies have numerous different products and therapies under development, but if each company is  using one therapeutic approach on a range of problems,  then all their products may all fall at the same hurdle. So, concentrated.  A separate concern is management turnover and a change in strategy.  The company quickly moved away from a pure development portfolio at its foundation and it now plays down its investment in its start-up investments, using terms like “legacy” and “development portfolio” rather than talking about the individual stocks in detail.  The company has never talked about a shift in strategy, it just reported its portfolio had changed.   In April 2020 two of its founder directors stepped down and at the same time, Jonathan Tobin stepped up from Investment Director to  Managing Director and a new Exec chairman was appointed.  In January 2021 Jonathan Tobin resigned as Managing Director.  There has been a new advisory panel appointed which has excellent credentials, but all this movement at the top does not inspire confidence.  What’s behind this big changing of the guard?

So there are some warning signs, but things seem to be going well. The company has “done what it says on the tin” so far.

A key issue for me is the fact that Arix’ performance will not be much to do with the market as a whole.  This lack of correlation of returns means that even though Arix is risky, because it won’t move in line with the rest of the shares I own, it will potentially reduce the variability of my portfolio.  Uncorrelated assets, or even better negatively correlated assets actually make diversification work in reducing risk. The fact that Arix is a fundamentally different risk to everything else I invest in is a strong reason to have it as part of my portfolio.

I shall be staying in Arix.  I think there is a clear case for having this as part of a portfolio of Biotech investments and there is also a strong case, as always, for not owning too much: A big bet on a concentrated speculative portfolio will not help me sleep at night.

1 Morningstar ratings 9/2/21
2 Market capitalisation – the market value of the company’s shares in issue.
3 The further along we go from discovery through pre-clinical and then phases 1,2,3 the closer we get to having a viable therapy. Each stage will potentially kill off a product due to toxicity, a lack of efficacy or both.